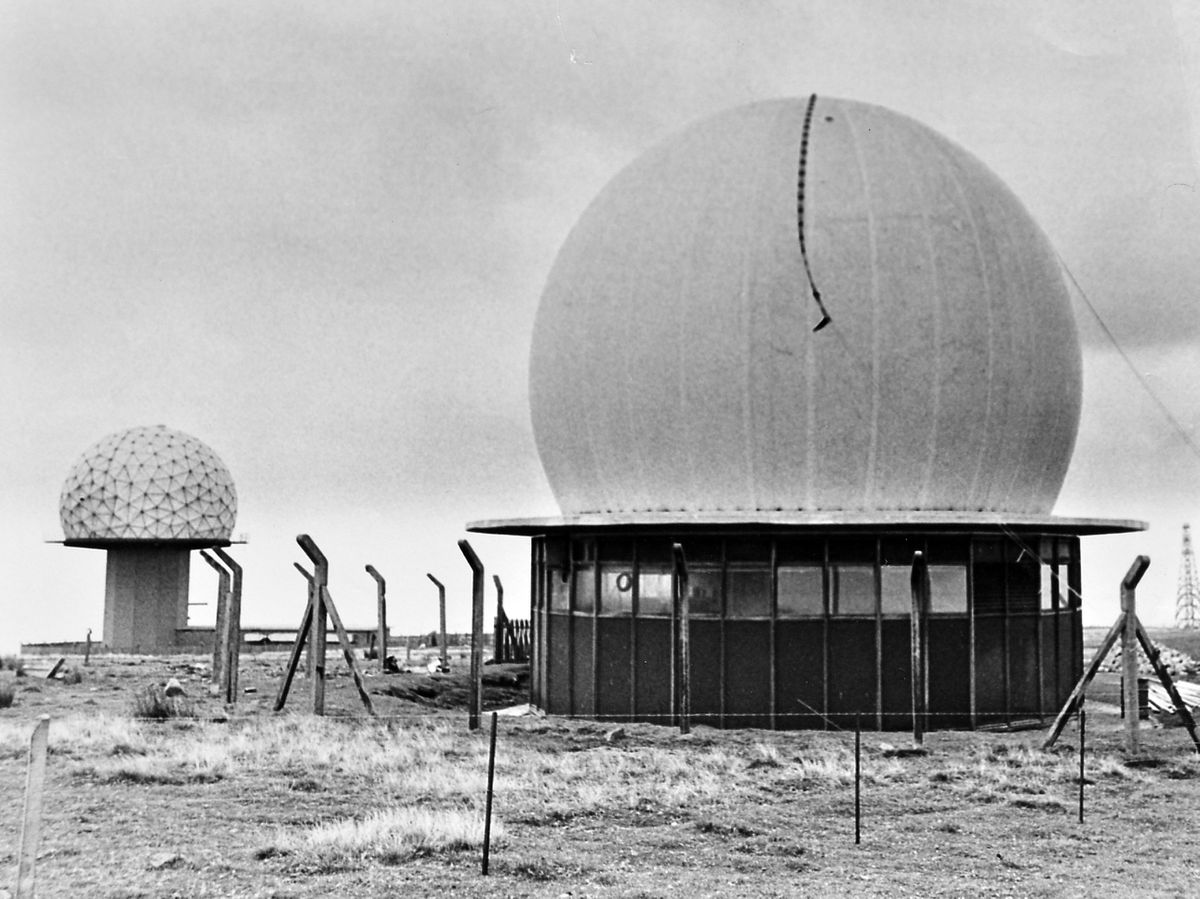 Because it’s the 80th anniversary year of one of Shropshire’s most unusual landmarks, on one of the county’s highest hills.

The radar station at the top of Titterstone Clee Hill will have been top secret when it was first erected in 1941 during some of the darkest days of the war.

And although that original station is long gone, the most modern radar on the hill today is part of a national radar network, while playing a key role in providing weather information to the Met Office.

In the first chapter of Clee Hill’s history, the equipment was maintained by a small group of radar operators and RAF mechanics.

Windswept and remote, RAF Clee Hill may not have been a popular posting for its 40-50 RAF members, despite the breathtaking views. It was a residential unit and until September 1956 they lived in huts at the top.

After that they lived in Ludlow and only went to the station during working hours.

With the hill covered in sheep, the airmen spoke of one of them who foolishly went “baa” one evening and, like a piper, arrived on duty followed by a herd of 30 sheep.

A newspaper article examining their work in June 1957, when the CO was a Flight Lieutenant Hole, stated: â€œLife was not so good when the men lived, and worked, on the hill. One or two more on the force Remember being isolated in snowdrifts and talk about times when the temperature fell to minus 10 degrees. “

Presumably, the article at the time would measure it in degrees Fahrenheit, so that minus 10 degrees translates to minus 23 degrees Celsius.

Another downside was the cost of the trip to Ludlow. Senior aviator John Taylor, one of those who had lived at the site, told our reporter that the price of the bus ticket at the time was 2s. 6d. return (around 13p today).

Bert Hobby, a civilian who had been a radar operator in the unit for seven years, had nevertheless learned to love the hill and “will be very sorry when the station is closed in October”.

It therefore closed in October 1957.

After the unit closed, the BBC reportedly installed a portable mast on the hill to relay signals from Sutton Coldfield. We say apparently because we wonder if the reporter made the common mistake of confusing Titterstone Clee Hill with Shropshire’s other Clee Hill, Brown Clee Hill (which is Shropshire’s tallest hill).

Anyway, in the summer of 1961, the Aviation Department was examining Titterstone Clee with a view to installing a new radar station there.

Thus in 1964, the hill experienced a renewal of its function as a radar station, this time with the commissioning of a radar station belonging to the Civil Aviation Authority. It was manned around the clock by at least two people and was part of a national air traffic service providing advice and control to civil aircraft.

It could still be a tough, lonely post, at around 1,700 feet tall. For example, in January 1968, Roy Beachill of Ashford and Joe Hanlon of Ludlow found their Land Rover stranded in snowdrifts at Dhustone and, braving strong winds, traveled the last two miles through five-foot snowdrifts.

At least when they arrived, they had some comfort at home. The station was centrally heated and had emergency food stocks, snowshoes and a manual snow plow to navigate its way through snowdrifts.

Shift time was normally 16 hours, although 24 hours was not uncommon.

Radomes, as opposed to masts, seem to have appeared in the early 1970s. They were certainly there in 1977, as a gale in November 1977 destroyed one of the domes, although it turned out to be there. was empty because the equipment inside had been removed as the base awaited new equipment. A replacement 40-foot radome appeared in 1978.

There is no doubt that the technology has been updated more than once since that time.