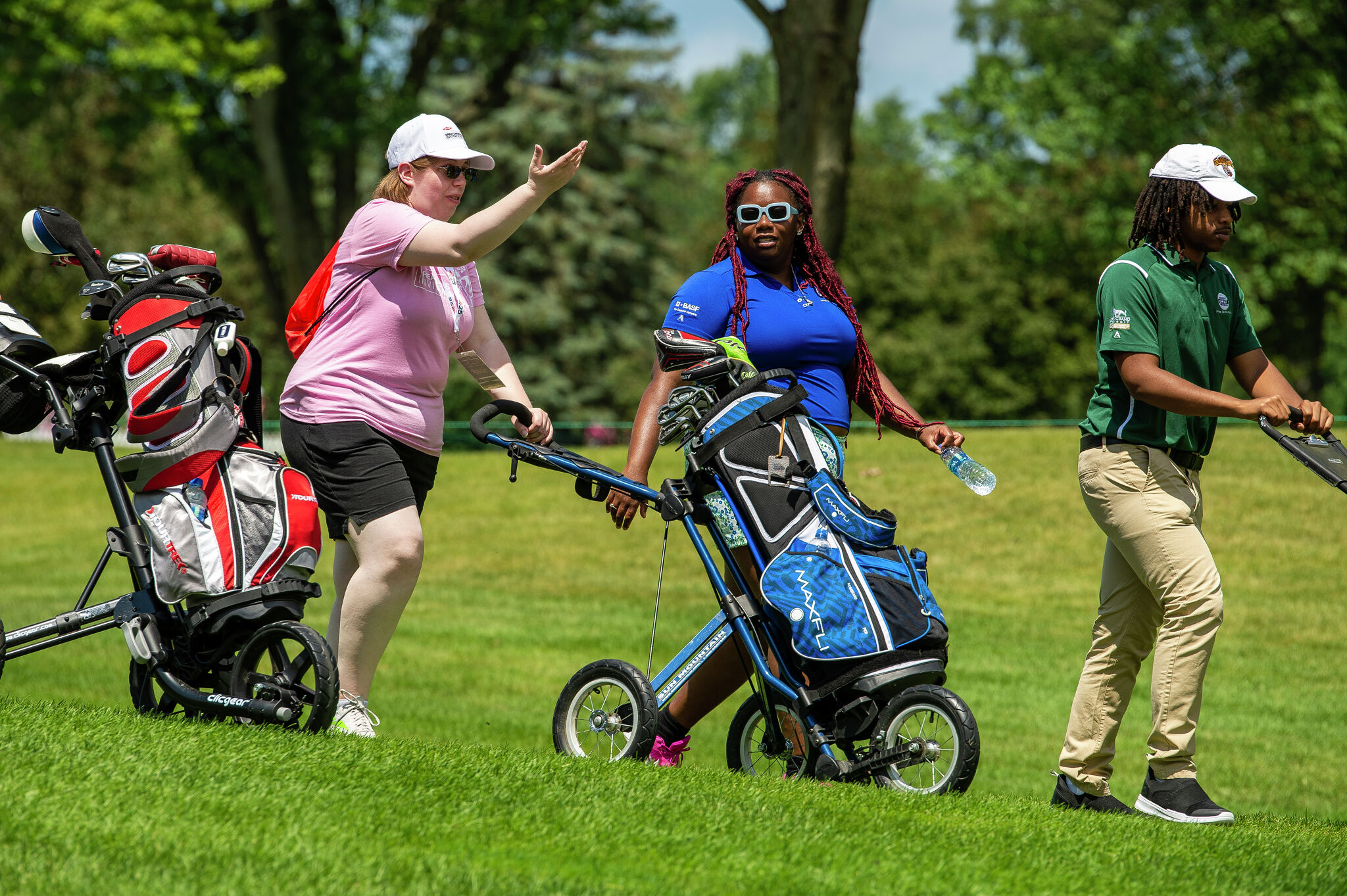 I never professed to be a serious fan of sports, especially golf; I subscribe to the age-old adage that “golf is a good walk wasted”.

Other than that, I’ve envied the golfers who play at Midland Country Club. These grounds, dotted with trees, hills, a stream and lush lawns, resemble an urban park on steroids. For many years, I have had a desire to stroll along the route.

My dream came true this week as I volunteered to be a pro-am caddy at the Great Lakes Bay Invitational.

Before setting foot on the course, however, I completed a 1.5 hour volunteer training session. Jerry Wasserman, flag bearer and chair of the pro-am caddy committee, walked attendees through the arrival process, what to wear, and tips for a successful caddy.

Wasserman explained that the main threat to golfers was lightning, followed by dehydration and flying balls. He assured us that weather watchers in the area would be watching for any potential lightning strikes and outlined what to do if a thunderstorm passes through the area. Wasserman also encouraged caddies to bring water and put their arms over their heads. They heard someone shout “Fore!” Apart from a few questions at the end of the session, we were ready to go.

Tuesday morning dawned bright and clear. After working a few hours, I put on my pink t-shirt – one of the few times I’ll ever wear pink – covered myself in a large amount of sunscreen, put on my cap and walked left.

I pay tribute to the organizers of the Dow GLBI because everything went like clockwork. For the pro-am, groups of amateur golfers teamed up with a professional athlete and were assigned to start first or 10e hole. I was directed to a group of Dow employees who got into a stampede with Pauline Roussin-Bouchard of Carqueiranne, France.

I quickly learned that golfers play golf not only to compete, but also to network. The golfers socialized, received advice from Roussin-Bouchard on how to improve their game, and chatted with the caddies about their course and future plans. As we circled the holes, I learned the difference between irons and woods (i.e. golf clubs), the course routes, and the challenges that come with them.

I also received a lesson on weather management. As we walked along the third fairway, the fluffy clouds dotting a crystal blue sky were replaced by darker nimbostratus clouds. The rain started when we reached the fourth hole, but luckily no lightning.

The caddies, who usually brought in the back of the pack, now had to descend a steep hill and climb another slope to reach the green. While the caddies transported the equipment via golf carts – think golf club buggies – I was later informed that the caddies had to carry the bags the first year of the Dow GLBI. Those rolling hills that I once admired have become slight inconveniences.

Roussin-Bouchard’s caddy, Jan Meierling, carried his golf bag over his shoulder. As the group prepared their shots and walked along the fairway, he was by their side, chatting about the game, often sharing a chuckle with Roussin-Bouchard. In addition to handling the clubs, Meierling measured the distance to the green and removed the flagstick from the hole, patiently waiting for the group to put in their balls. He provided an excellent example to the other cadets.

Caddying has been a tiresome adventure in a good way, with some stories for my friends and family, and a greater appreciation for the sport of golf.

That afternoon, I returned home and feasted on a refreshing Arnold Palmer, thinking about the possibility of caddying back to the Dow GLBI next year.

Workshop interview with a professional caddy

Jan Meierling, from Düsseldorf, Germany, has had an interest in golf since he was 12 years old. In his early twenties, he played professionally for a few years. He became a caddy five years ago for the Ladies Professional Golf Association. His regular caddies for Amy Yang, but due to the schedule he caddied for Pauline Roussin-Bouchard at the Dow Great Lakes Bay Invitational.

What drew you to golf? It’s very unique. You are always playing on a different surface than other sports. With most other sports, it’s the same court or field. Each (golf) course has its own set of challenges and characteristics.

Why did you decide to switch from playing in the PGA to caddying in the LPGA? I was just frying myself. It was very competitive and I couldn’t get to the next level. A friend of mine asked me if I wanted to help out with some events on this tour (LPGA) and I said yes. I always wanted to gain experience because I want to become a coach later. I thought that would be a good vantage point. I wanted to see how the girls were doing.

When I started caddying, I realized it still had the same competitive feel as if I was playing myself. You want your player to succeed. You go through the same emotions and everything. Except for not knocking the punch, it’s actually very similar in many ways.

What are your favorite parts of being a caddy? Traveling all over the world, discovering different cultures. Competitiveness too. You feel like you’re always competing in a tournament, being able to help someone else achieve their goals.

I was very involved in the game (of Roussin-Bouchard), in terms of swing and preparation. It gives me great pleasure to be able to be part of this whole process, even during the weeks of preparation for the tournaments.

What are some of the caddy challenges? It depends on who you work with. There are different sets of challenges. With (Roussin-Bouchard), it concentrates her at the right time because she has experienced everything. It’s being able to read her body language, knowing when she might not be 100% focused and then finding a way to re-engage her in whatever is going on with the tournament.

The art of being a caddy is to be as balanced as possible, whatever the situation. You need to be as calm as possible and not let the player be affected by the emotions you are going through. The last thing they need to see is you freaking out. You need to keep your cool in all types of situations.

The biggest challenge is knowing when not to say something. It is always better to under-caddie than to over-caddie. If you give them too much information, it’s not a good thing.

What does it take to be a good caddy? You have to be really good at reading your individual player, picking up on the little signs, whether it’s body language or the way he talks about shots. Awareness is the most important thing. You’re essentially that extra pair of eyes for your player, picking up on things they normally wouldn’t see because they’re busy preparing for the tournament.

It’s also about being able to improvise – not being stuck in a rut, but being ready to adapt to any situation as quickly as possible. There are different routes, scenarios, or weather conditions that require different strategies. You have to think on a very improvised level.

What is one thing you wish people knew about being a professional caddy? The misconception most people have is that we just carry the bag and count the numbers. There’s a lot more to it, like getting your player in the right frame of mind and being almost a sports psychologist here, giving them the best attitude possible. A lot of those things that people don’t pick up on because they don’t hear the dialogue that we have right before every shot. It could be a few different words you say that change everything for the player. You need to be aware of the words you use. There are 10 different ways to say the same thing, but it can make a huge difference in improving your player’s mood for that shot or hole.

Is there a job or activity that you haven’t tried or that interests you? Do you have a job that people know little about and you want to share your experience with readers? If so, contact Victoria (Tori) Ritter at [email protected]