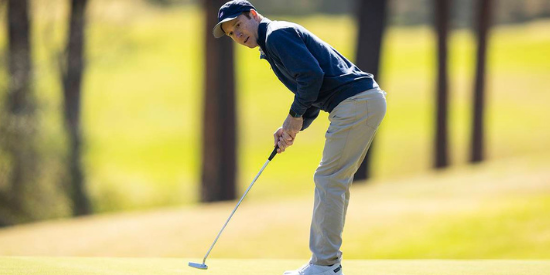 Chris Biggins felt those looks. Those of people who do not know his arduous journey that began in early childhood. His noticeable limp has always aroused curiosity. Some people even made hasty judgments about his disability.

What’s wrong with this boy?

But beyond the obvious physical differences, Biggins is just like any other 30-year-old. He likes sports. He likes to compete. He likes to engage with people.

The Maryland native, who has called Birmingham, Alabama home for the past decade, is one of the best adaptive golfers in the world, and next week he’ll showcase those skills at the inaugural US Adaptive Open at the course. from the Pinehurst Resort & Country Club. No. 6, where he will compete in the Neurological Disorders division of the all-new USGA Championship.

Biggins was born with cerebral palsy (CP), a group of muscular and neurological conditions that affect a person’s ability to move and maintain posture and balance. His condition affects his lower body, particularly his right leg. Some with CP have speech impediments. Although he is competing in the neurological category, the CP does not affect his mental capacity. 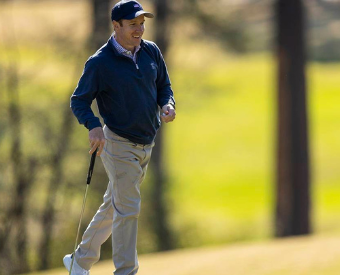 About a year after he was born, doctors made the diagnosis. Everything about Biggins’ physical development, like crawling and walking, has been slowed down. He needed a walker to get around and he suffered muscle strain in his hamstrings and legs.

But aside from a broken foot at age 14, CP never dampened Biggins’ desire to play and excel in the sport. He loved baseball and pitched until his sophomore year of high school when he was kicked from the team. He then turned to golf, a game he fell in love with at an early age.

“It wasn’t a coach telling me I wasn’t good enough, it was a scorecard,” Biggins said when asked what drew him to it. “I still love baseball. Being an athlete was something I had to do, and the doctors told me I had to do it. I didn’t want to stagnate.”

Golf has proven to be both therapeutic and cathartic. It gave Biggins confidence and a sense of accomplishment.

Summers were first spent at the Enterprise Golf Course in Mitchellville, Maryland, where he filled the divots in the mornings and played in the afternoons. He then moved on to the Paint Branch Golf Course in College Park, which offers a First Tee program and a par 31 nine-hole executive course. It was here that Biggins developed an impeccable short game. With his handicap, he was never going to be John Daly-esque off the tee, and his deft touch around the greens overcomes any power deficiencies.

In his senior year of high school, Biggins was his county (Howard) player of the year and district champion. This encouraged him to pursue a career in the game, not as a professional player but as an instructor. Methodist College in Fayetteville, North Carolina provided the perfect refuge for this dream. The NCAA Division III powerhouse, which has won 13 national titles, allows students in the Professional Golf Management program to also play on the team, which larger schools such as Penn State and Mississippi State do not allow.

After two years of trying, he qualified for the golf team as a junior and competed in one event as a senior. In the meantime, he interned at Woodmont Country Club, then spent two life-changing years at the Country Club in Birmingham, Alabama.

Eric Eshleman, the longtime director of golf at the Country Club of Birmingham (CCB), which hosted the US Amateur Four-Ball (his third USGA event) in May, was on a trip to Methodist to recruit potential trainees when he got a call from David Dorn, the golf manager at Woodmont.

“He said to me, ‘You’re going to interview one of the best people and employees I’ve ever had,'” Eshleman said. “I recommend you hire him.

“I was in an office at Methodist and Chris came in and said, ‘I have cerebral palsy, and golf is the sport that affects me the least, and I would like to continue my career in golf.'”

Eshleman hired him on the spot, first as a trainee and then full-time when Biggins graduated in 2014. He is still on staff and one of the club’s most popular employees. Biggins’ current title is Director of Player Development, overseeing one of the largest junior programs in the country. CCB, which saw 245 kids compete in its Age Group Club Championships last year, can boast seven players on Division I rosters, including Eshleman’s son Ryan (Auburn) and Ford Clegg (Mississippi State). Another alumnus is Gordon Sargent, the 2022 NCAA individual champion who helped Vanderbilt win this year’s Southeastern Conference title and an NCAA region.

The CCB Junior Golf Team is divided into two age groups: 10-14 and 15+. Biggins treats those in the older group as if they were already in college, tailoring a diet that reflects what they are likely to see at the next level.

Biggins does more than teach. He competes with and against them. And he hates losing, even if his physical qualities are not always there.

“I hit the ball shorter than all the older guys, but [I’m] still beating them the majority of the time,” Biggins said. “It’s my short game. It’s something I preach the most [to my students]. You have to be the best in the world at climbing and descending if you want to reach the highest levels.

Biggins knows what it’s like to be at the top of your game. He is currently the No. 3 disabled player in the world – and No. 1 in the United States – according to the World Rankings of Disabled Golfers (WR4GD). Six years ago Biggins first heard of competitions for disabled players, but most were for amputees. However, for the past three years, the European Tour (now DP World Tour) has partnered with the EDGA and run adaptive competitions alongside regular European Tour events. He won an event at the London Club and twice reached the final in Dubai, where he finished third in 2019 and sixth last year.

This year the G4DT (Golfers for Disability Tour) was created and Biggins lost a playoff at a tournament at the Belfry in early May.

In 2019, he won the United States Disabled Golfers’ Open at Independence Golf Club in Richmond, Virginia. He also shot a 9-under par 63 at Bobby Jones Golf Club in Atlanta to win a Georgia State Golf Association Adaptive event.

This all preceded the USGA’s announcement of the US Adaptive Open. Biggins was at his gym when he first heard the news, and it didn’t take long for him to share his excitement with friends and colleagues at CCB. Eshleman has been one of his biggest supporters. In fact, shortly after graduating as a Methodist, Biggins spent the winter in Park City, Utah, training with the U.S. Paralympic Ski Team. He had attended the Hartford Ski Spectacular in Breckenridge, Colorado, and American coaches had noticed his extraordinary talent.

“I called Eric and asked for two weeks off, and he told me [to give it my full effort]”, Biggins said. “Go for six [weeks]. It turned into three months in the last eight years. The staff worked very hard to cover my end.

Biggins competed in all four disciplines: slalom, giant slalom, super-G and downhill. He was never high enough in the pecking order to qualify for the Paralympics in 2018 or 2022, but that pushed Biggins’ competitive juices even further.

Now, the US Adaptive Open and similar tournaments provide him and hundreds of other elite disabled golfers with a major platform to showcase their skills.

“He’s not walking well, but that’s it,” said Eshleman, who saw the Biggins caddy during USGA qualifying for his son while dodging a golf cart. “Once you get past that, there’s nothing different about him. He is brilliant and very competitive. It drives me crazy because I can’t beat him at ping-pong, I can’t beat him at basketball. I certainly can’t get over it. And his golf game is amazing.

Don’t expect Biggins to ask for preferential treatment either. A few years ago, he accompanied six members and another pro to Laurel Valley, Pennsylvania for a competition. They all completed 36 holes that day and Biggins shot a 74 in the afternoon.

All of these accomplishments made Biggins realize that he can have an impact on others. He talks eloquently about his surgeries and treatments. Golf provided a happy lifestyle. He recently got engaged to Birmingham resident Heather Tapscott and the two will wed in February.

He also became active with United Ability, a non-profit organization that helps people with disabilities such as CP. The organization helped defray the costs of his botox injections and treatment when he arrived at CCB. Currently a junior board member, Biggins now takes motivational speaking engagements at colleges, local high schools, scout troops, corporations and varsity teams.

“Eric told me he had a bigger vision than me as an instructor,” Biggins said. “Eric is one in a million. I wonder where I would be without him. He could have said no to skiing or golf events. He says yes.

And that led Biggins to attract not curiosity, but genuine admiration for his accomplishments.