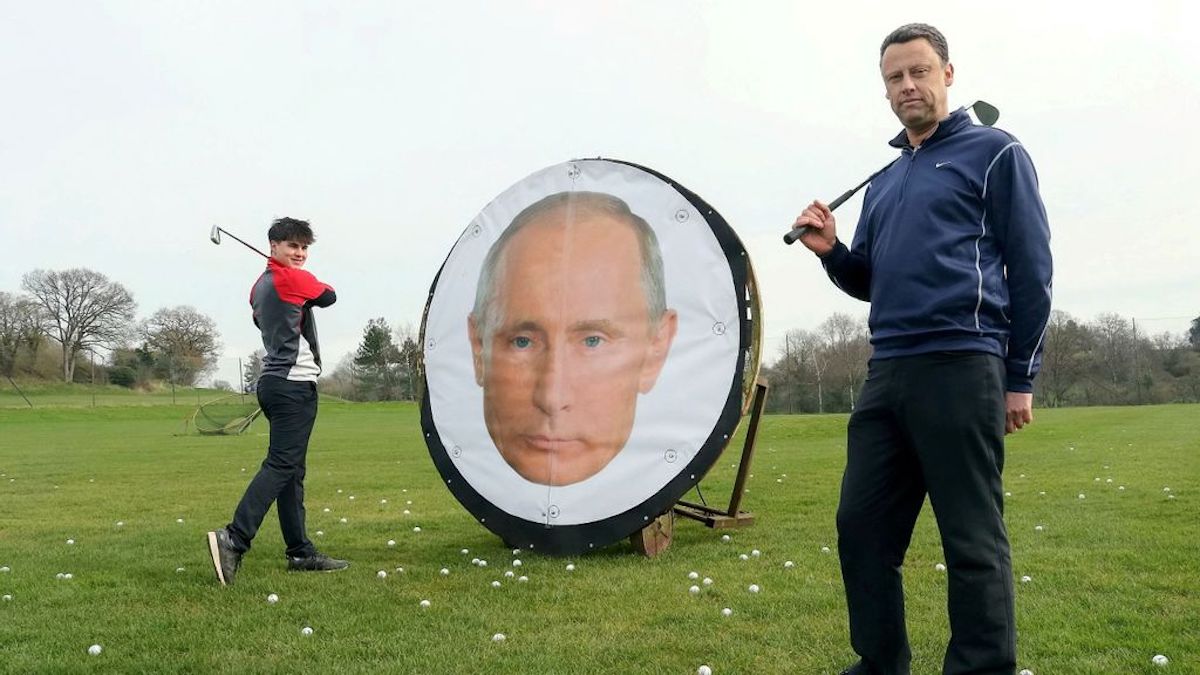 A golf course has added giant images of Vladimir Putin to its practice targets, inviting golfers to smash balls into the face of the Russian president.

Grove Golf and Bowl in Leominster, Herefordshire, west of Birmingham, England, asks patrons to ‘make sense’ of the Russian leader while raising money for the Ukrainian people.

Owner Roger Helme has printed giant photo portraits of Putin and attached them to the redesigned targets, which are dotted around the driving range.

Visitors are encouraged to use their golfing prowess to channel their anger over the war in Ukraine by hitting balls in Putin’s face.

Ten percent of all proceeds will go to the Disasters Emergency Committee Ukraine humanitarian appeal.

“Like everyone else, we watched the news, feeling helpless as the situation unfolded,” said Helme, owner of the center with his family.

“We are in the 21st century. This kind of thing should not happen anymore.

“It must be absolutely soul destroying for the people there,” he said.

Regular customer Will Maguire, 37, praised the incentive and said it was a great way to relieve stress and frustration.

“I’m not going to lie, it’s quite satisfying to smash a ball in Putin’s face and get rid of a lot of stress,” said the father-of-one from Hereford.

“It’s a fun way to raise money for what is just an awful, unimaginable situation and anything that helps the people of Ukraine has to be a good thing,” he said.

“It definitely helps improve your game because I couldn’t help but aim for it,” said fellow golfer Danny Frampton, 42, of Leominster.

“At one point you had about 20 golfers all aiming for the same goal. It was really, really funny. It’s a great feeling when you land a ball on its bonce [head].

“I think it’s a brilliant idea and a great way to help out a bit because everyone was mortified by what they saw unfold there.”

The war in Ukraine has entered its 23rd day, following the invasion of the sovereign nation by Russian troops under the guise of “denazifying” the country.

Condemnation of Russia’s military action has been widespread, with the International Court of Justice ordering Russia on March 16 to immediately cease all military operations in Ukraine.

On the same day, US President Joseph R. Biden Jr. announced an $800 million aid package for the defense of Ukraine, bringing total US aid to the country to $1 billion per year. last week and $2 billion since Biden took office, according to a White House statement.

The United Nations High Commissioner for Refugees notes on its website that more than 3.2 million people have already fled Ukraine since February 24, with up to 6.7 million expected to be displaced to inside the country by the crisis.

This story was provided to Newsweek by Zenger News.