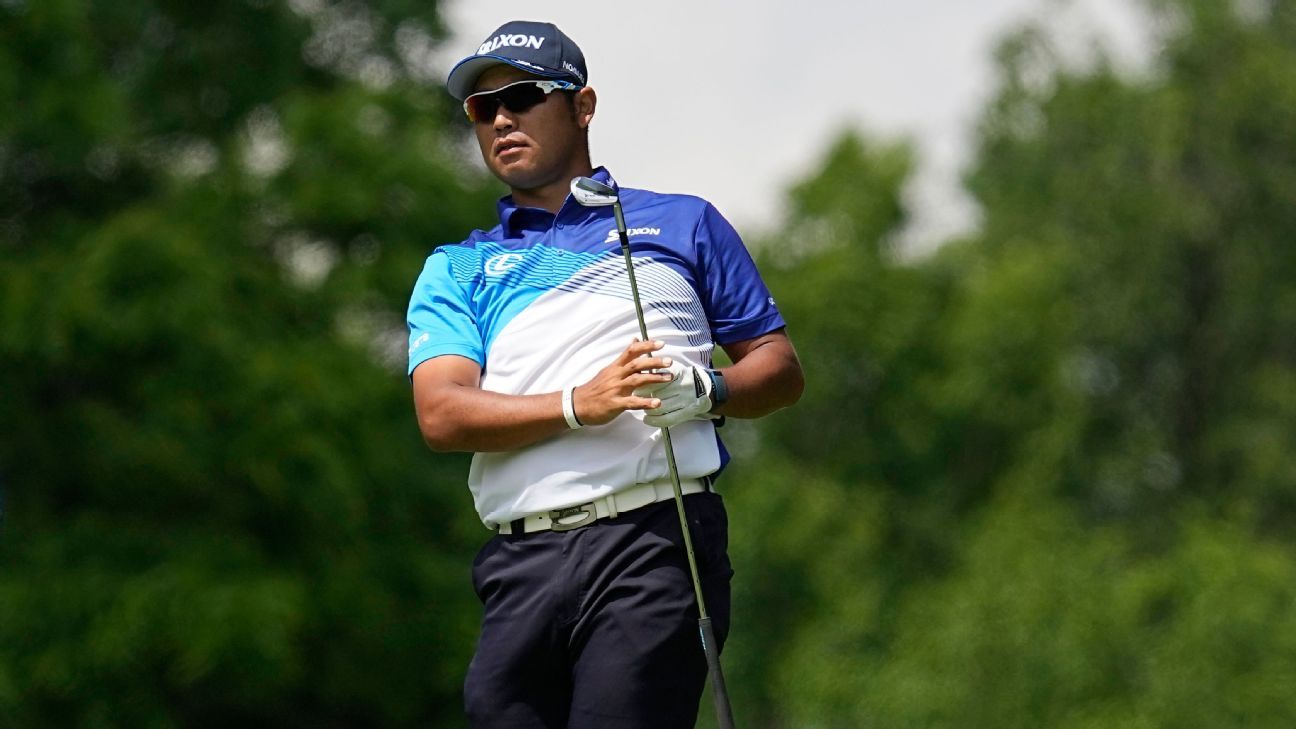 COLUMBUS, Ohio — Hideki Matsuyama was disqualified from the Memorial’s first round on Thursday for having an illegal substance on his 3-wood’s face.

PGA Tour chief umpire Steve Rintoul said the tour became aware of the issue after someone emailed a photo of the 3-wood, which was posted on Instagram. Rintoul said rules officials were immediately dispatched to find Matsuyama, who was playing the first hole at Muirfield Village Golf Club.

Matsuyama was asked if he carried the club and if he used it. He told them he used it to play the first hole. Rintoul said white correction fluid was applied to the club face to help Matsuyama center the ball.

“The damage was done,” Rintoul said. “One hit and it’s a disqualification.”

Rintoul then met Matsuyama on the fifth fairway and told him to keep playing, while he consulted with USGA rules officials about whether or not he was playing with a non-compliant club.

Rules officials determined that Matsuyama violated the standard equipment rule, Rule 4.a. (3) of the Rules of Golf, which states that “A player must not make a stroke with a club whose performance characteristics he has deliberately altered during the round. .” According to the Rules of Golf, a violation can occur by “using an adjustable feature or physically changing the club”, or by “applying any substance to the clubhead (other than cleaning it) to affect the how he performs a stroke”.

“A substance or treatment may not be applied to the face of a club that could influence ball flight, spin, loft or anything on the ball, ball performance,” said Rintoul.

“So at that time was how much of that substance was actually on the face of the club? And the footage was overwhelming. … There was a lot of white. It’s kind of like a whiteout that you could use on a paper at home. A whiteout stuff that was very present on the face of the club which, really, it’s very clear in the rules of equipment that’s not allowed.

Matsuyama, the 2021 Masters champion, was notified of his disqualification by a rules official as he made the turn. He was 2 after nine holes. It was the first disqualification of his PGA Tour career.

“The equipment rules are very specific: it’s okay to have very small, inconspicuous marks on your face for alignment purposes, like a Sharpie point here and there, that won’t influence the ball,” said Rintoul. “But this amount of substance is clearly above what the equipment rules allow. If the paint had been in the grooves and at the bottom of the grooves where it is not on the face, without coming into contact with the ball, again, no problem.”

Rintoul said one of Matsuyama’s team members had previously been warned not to put any substance on a club’s face. Rintoul recalled that it happened with Matsuyama’s driver in the past. Rintoul said the equipment representative told him on Thursday that he believed the rule only applied to drivers.

“I will say it was a mistake on their part,” Rintoul said.