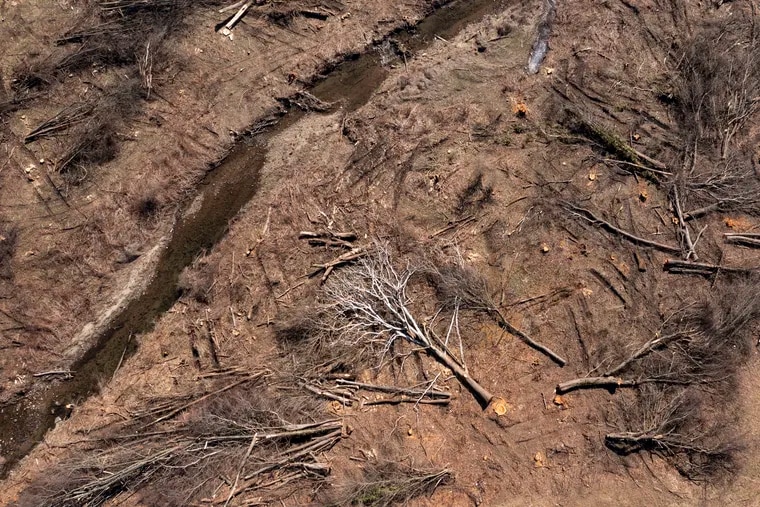 Rochelle Maurer and Larry Szmulowicz adjusted a tape measure at Philadelphia’s Cobbs Creek Golf Course to the diameter of a large felled tree to find its widest part.

The sycamore was about 4½ feet in diameter and the rings indicated it could be around 75 years old, although it is difficult to count them exactly. Two old golf balls nestled in the ground nearby.

The tree is one of hundreds, if not more than a thousand clear-cut trees along Cobbs and Indian creeks on the course. The newly cut swath lay in pockets about half a mile long and hundreds of feet deep. In total, the cut covers portions of 88 acres.

Whole groves that once lined Cardington Road have now disappeared as part of the restoration of the town’s golf course, which closed in 2020 after repeated flooding and a clubhouse fire years before.

Officials say trees had to be felled to renovate the course and to control flooding and restore wetlands.

“Philadelphia Parks and Recreation recognizes that much of the site is in poor environmental condition due to years of neglect and deferred maintenance,” the department said in a statement. “The rampant spread of invasive species and overgrowth, along with the deterioration of streams and heavy flooding, creates an unstable environment for any natural landscape to thrive.”

Maurer and Szmulowicz are part of a local community group, Cobbs Creek Ambassadors, who, along with birdwatchers, wonder why so many trees had to be cut down. The trees adjoined Haddington Woods, so many people used the town-owned property as part of a local open space.

“I’m devastated,” said Maurer, who works in customer service and is a member of the Cobbs Creek Ambassadors, a group dedicated to cleanups and nature tours in the area.

The group has been active on social media about the trees, as have local birdwatchers.

The 105-year-old course is undergoing a $65 million restoration, which includes a new clubhouse and community and education center.

The money was raised by the nonprofit Cobbs Creek Foundation, and construction is slated for the spring for a “championship course capable of hosting PGA Tour events” and expected to open by 2024.

As part of the renovations, the foundation also said it plans to spend $15 million to restore three miles of Cobbs and Indian Creeks, which would create up to 37 acres of wetlands to help control flooding.

Local residents were therefore surprised when they noticed that large healthy trees, which they say are a normal part of flood control strategies, were felled en masse from mid-February.

“You feel like you’re in a graveyard of thousands of trees,” said Temwa Wright, co-head of ambassadors. “What type of restoration requires this?” It’s really hard to understand.”

The group supports the renovation of the course and has no problem with the return of golf. All expected some trees to be removed, but they don’t understand the need for the expanse, especially along creek beds, where trees help prevent erosion and provide wildlife habitat.

Wright noted that the city created an urban forestry plan to increase the tree canopy by 30% because it has lost so many trees over the past few decades.

“It’s so incongruous to cut down all these trees,” Wright said. “It does not make sense.”

“The work currently underway to restore the Cobbs Creek Golf Course represents years of advocacy by the Overbrook community to restore this historic public golf course, which was one of the first courses in the country where black and female golfers were able to play,” Parks and Rec said in a statement in response to several emails from The Inquirer.

The statement said the department has worked with the Cobbs Creek Foundation on a development plan that returns the course to its original historic 1916 design “while ensuring that every effort is made to leave high quality vegetation intact and avoid deforestation unless necessary”.

The Cobbs Creek Foundation said in a statement that the trees fell as part of efforts to restore the course to its original 1916 design.

“This includes plans to remove some, but not all, of the trees on approximately 25% of the site’s 350 acres,” the statement said. “Every effort is made to leave high quality vegetation intact and avoid deforestation unless necessary.”

The foundation said most of the harvested trees and wood would be used in ecological restoration “to provide vertical stability, help develop floodplain wetlands, and add large woody debris and a diversity of habitats at the restored complex. The landscape will also be restored with new trees and woody plants. The project areas would be permanently protected and transformed into a mature forested buffer zone with much higher quality vegetation than the site currently supports.

The foundation said Cobbs Creek and its tributaries were badly eroded, distributing tons of sediment downstream.

“The creek is fed largely by pulses of high-energy stormwater, and given the extremely poor condition of the banks, the creek will continue to be a source of sediment for the watershed for the foreseeable future” , says its press release.

The project will “holistically repair the eroded creek and prevent very significant, long-term sedimentation, while preventing further pollution and restoring the ecosystem,” he said.

Meanwhile, Cobbs Creek Ambassadors say at least a few trees have been cleared for a large parking lot. They hope to save the trees they can.

The trees were in the Atlantic Flyway, an important flyway for dozens of bird species and a refuge for people and wildlife in the dense urban area which also borders Upper Darby, said Maurer.

“It’s been part of a grassroots conversation, or environmental scene, for five or six years now to try to get more people of color involved in conservation and environmental learning,” Maurer said. “And I feel like this particular space is extremely valuable as a living classroom for people who live in an area of ​​Philadelphia to engage with and engage with the environment.”

She said crews not only felled trees, but ripped up other habitat, such as rushes that lined the banks.

“Much of this forest was mature,” she said, noting a mix of hardwoods including sycamore, oak, maple and cherry. “Some of the trees felled here were over 50 inches in diameter, indicating they were approaching 75 to 100 years old.”