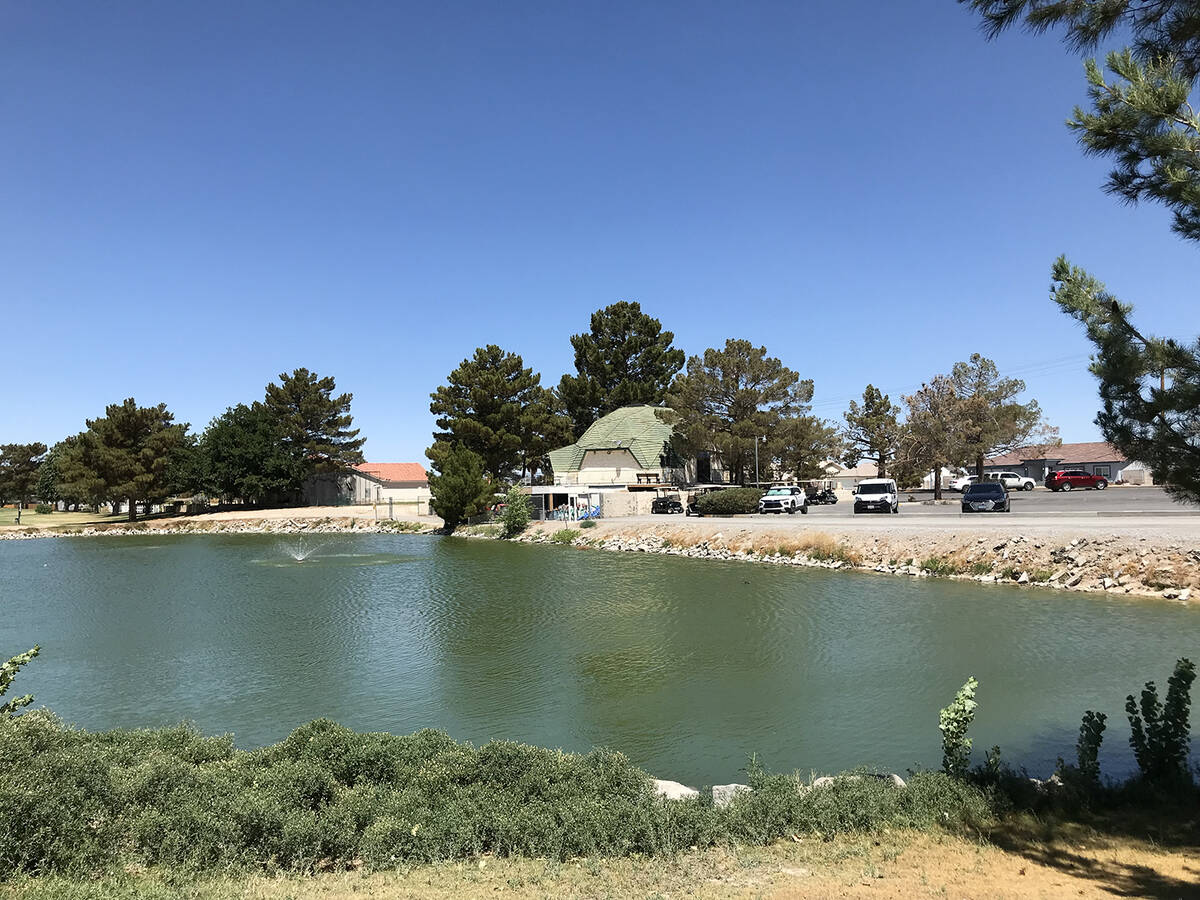 Officials with CourseCo. recently appeared before the Nye County Commission, sitting as the governing body of the Town of Pahrump, to provide the company’s annual plan for the Lakeview Executive Golf Course.

Despite multiple setbacks since securing the Lakeview management contract in 2019, CourseCo. has managed to make progress over the past 12 months. New management has taken the helm, several upgrades and improvements have been made, and the amount the course costs the city each year to operate has gone down.

Aaron Hensley, Senior Director of Operations at CourseCo, and Tanner Bown, General Manager of Lakeview, were both on hand to give the presentation and answer questions on Wednesday, June 22. Hensley began by outlining the most recent challenge the company has faced, the intense summer storms that swept through Pahrump last summer, wreaking havoc across the city.

“One of the main issues that needs to be raised is the severe storm that occurred in the region at the end of July (2021). Lakeview has obviously not been spared throughout this process and being an outdoor recreational activity it has certainly been negatively affected during this time,” Hensley explained. “So we had a great plan to start the year and then unforeseen circumstances really hit us and put us behind the eight ball.”

Hensley noted that many holes were flooded causing loss of turf, and the course was even forced to close due to floodwaters. There were also downed trees on the property and the buildings that house the pump stations used to water the course, as well as the maintenance facilities, were inundated with several feet of water. “It really was a complete mess of the entire property,” Hensley reported.

He said the storm happened just weeks after he was named Lakeview’s senior operations manager and the cleanup effort took between 90 and 120 days. The course is still somewhat beleaguered by the storm, however, greens renovation is one of the capital plan projects listed for the upcoming fiscal year.

Shifting gears, Hensley said a positive change that came last year was the formation of an ad hoc committee to help guide the direction of the golf course.

“During last year’s report to the commission, there were discussions about the possibility of having an advisory committee in some form,” he noted. “We actually loved that idea… We said hey, let’s go and train it with avid golfers from across the facility. There are several who came forward last year when we presented and we want those people on the committee as well, we want their opinion.

This committee is now fully formed and functional.

Another constructive step forward was the establishment of a volunteer program, to allow people to volunteer their labor and time to help the golf course. “I am happy to announce that in October of last year we now have an official volunteer program. There is a listing in the Golf Shop and as volunteer work becomes available we are able to connect with people who want to give back by volunteering for specific tasks,” said Hensley.

Looking ahead, the presentation detailed two other major capital improvement projects for the next 12 months, including pump station upgrades at Lakeview and the old Willow Creek course, both of which are in use to help irrigate the Lakeview greens.

CourseCo. will also host several non-golf related events in the coming months, with the aim of attracting a variety of customers to the site. There will be a movie night in August, followed by an animal adoption event in October and a holiday spirit day in December. For 2023, the company also plans to organize an Easter egg hunt.

Along with all of its other operating expenses, CourseCo. forecasts total expenditures of $482,381 for the 2022-2023 fiscal year. Total revenue is projected at $402,650. That means the town of Pahrump will need to cover about $79,000 in expenses over the next year.

As detailed in the presentation, in the 2021-2022 fiscal year, the operation of the golf course cost the town of Pahrump $175,954. Compared to last year, this is a decrease of nearly $100,000 and this decrease in net loss follows a trend that has continued over the past three years.

Commissioner Donna Cox, who was on the board when the commission decided to buy Lakeview, was originally against the idea of ​​the town acquiring the course and hiring a management company. However, she commented that she felt a little more comfortable with the situation now.

Commissioner Bruce Jabbour added that he too had criticized the course in the past for running ‘in the red’ but said he was now confident the company would be able to reverse it. steam and make the course a source of income instead of a levy on the coffers of the city.

The full 22-page presentation on the Lakeview Executive Golf Course is available online at www.NyeCountyNV.gov as part of the Nye County Commission’s June 22 agenda.