The craziest things we’ve seen on the golf course 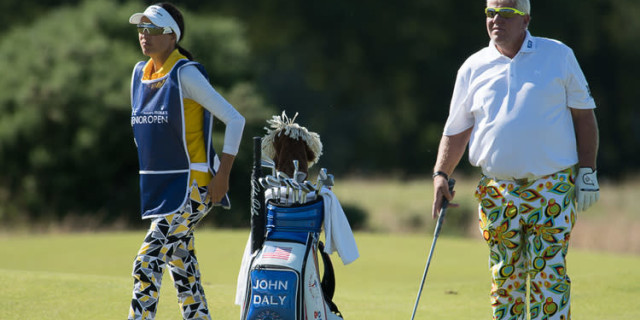 GOLF is one of those sports. We love it and hate it in equal parts – and it makes us all do crazy things. We’ve all seen and done weird things on the golf course, either firsthand or perpetrated by some of the best players in the world.

Here we take a look at some of the craziest scenes seen on courses around the world. I’ve also included a few stories involving people I know – I’ve changed their names to protect the “innocent”.

Stenson goes straight to the point

Swede Henrik Stenson is a character, a golfer who has always done things his way. In the opening round of the 2009 WGC-Cadillac Championship, Stenson missed the fairway and found his ball in a muddy spot in the water. He could have taken a penalty, but that’s not his way of doing it. Instead, he stripped down to his briefs to hit his second mudshot on the third hole. Professional golfers taking off their shoes and socks to play such a shot is quite common, but taking off their shirt and pants? He said he didn’t want his white pants and yellow shirt to be covered in mud.

Daly sinks without a trace

John Daly never did things normally. A chain smoker, he had problems with alcohol and became addicted to chocolate. But it was his appearance at the 2011 Australian Open that earned Daly entry here. After landing a huge appearance fee, he came to the 11th hole at Lakes Golf Club, where he hit his tee shot into the water. And then another. And another. And another. In total, Daly hit six balls into the water, then turned to playing partner Craig Parry, shook his hand, and left. “It’s fair to say that I don’t think we will see John Daly again at the Australian Open,” said tournament director Trevor Herden.

I run a golf company. Let’s just say that the abilities of those who participate are quite mixed. In truth, we do it for the social side, for the fun we all have in and around the clubhouse on a Sunday night. We play four-ball on Sunday and singles on Monday. One of ours (let’s call him Mark) readily admits he hates golf. So here I am standing on the ninth tee at the Essex Golf and Country Club on Monday morning. Mark is in the group in front of us. We saw him hack the whole course. Left. To the right. Find just about every bunker on the first nine. We watch him hit a golf ball into a pond on the left side of the ninth fairway. He remains frozen for a few moments. And then we watch in disbelief as he picks up his cart and throws it into the pond. He then walks. A few seconds later, he stops, turns around and walks towards the pond. He takes off his shoes, socks and pants and wades. He may hate golf. He may hate his golf clubs. But he realized that his bag contained his car keys, his wallet and his mobile phone!

I have a close friend who worked as a tennis correspondent for a national newspaper. Let’s call him Barry. He was in Melbourne for two weeks covering the Australian Open tennis tournament and had some time off. Now Barry would be the first to admit he’s not the best golfer in the world, but he loves a challenge. While in Australia, he received an invitation to play 18 holes at Royal Melbourne but explained that he did not have his clubs with him. No matter, they were going to prepare a set for him. So Barry shows up at Royal Melbourne, one of the most prestigious golf courses on the planet, and collects golf clubs. Without warming up, he heads for the first tee, lands a ball, then watches in absolute horror as the ball comes off the driver’s toe and crashes through the front door of the neighboring clubhouse!

There is no golf event like the Ryder Cup. It affects different golfers in different ways, and it’s an event in which the home gallery becomes totally involved, cheering and hollering when their players hit good shots, and doing exactly the same when the away team hits bad shots or misses short putts. The atmosphere is unique. Standing on the first tee in the 2012 match at Medinah, Bubba Watson began leading the crowd, encouraging them to cheer as he hit his opening shot. Two years later he did the exact same thing at Gleneagles!

Weekley takes his driver for a ride

Boo Weekley would be the first to admit he’s a larger than life character. Hunting and fishing are his passion. He’s a good old country man for whom golf was a means to an end. And he probably surprised himself by qualifying for Team USA in the 2008 Ryder Cup. And boy did he like it. After hitting his opening drive in his singles match against Oliver Wilson, Weekley tucked his driver between his legs and galloped down the fairway doing the Happy Gilmore bull dance. It provided the enduring image of a game that saw the Americans win the trophy.

Gribble does the unthinkable

There are many hazards on and around golf courses around the world. Ponds, railroads, bunkers, knee-high rough. And the alligators. Playing in the first round of the Arnold Palmer Invitational in 2017, Cody Gribble came across an alligator sleeping next to the sixth fairway. Most people would have given it plenty of room. Not Gribble. He decided to approach it and smack its tail. Luckily for Gribble, the alligator jumped into the water. “It’s probably frowned upon, but I wasn’t too worried at the time,” Gribble said. “These guys, I mean, it’s like a jerk, it’s fast, they’re not going to catch you, they’re not going to catch you a few steps down. I mean, they’re gonna get you real soon, but it’s, I mean, I’m not in his way, I’m right behind him, it’s not gonna happen. They are fast, but they are not that fast.

The 1999 Open Championship at Carnoustie is remembered for the collapse of Frenchman Jean Van de Velde’s last hole. Needing a six to lift the Claret Jug, he took seven and ended up losing in the playoffs to Scotsman Paul Lawrie, who had started the day 10 shots down. There were plenty of crazy moments while Van de Velde played on the 18th, but none more so than after hitting his golf ball in the Barry Burn. Instead of accepting his fate, Van de Velde took off his shoes and socks, rolled up his pants and waddled into the burn. Legendary commentator Peter Alliss wondered if he had lost his mind.

Bryson DeChambeau hits the ball farther than any other professional on the circuit and is proud of it. But during the 2021 Players Championship at TPC Sawgrass, he produced one of golf’s “did it really happen” moments. Playing with Lee Westwood on the final lap, he stood on the fourth tee with a fairway wood in hand, took a powerful swing and watched in disbelief as he hit an icy top that didn’t travel more 50 meters and ended up in a pond.

Augusta gets her own back

Sergio Garcia returned to Augusta in 2018 as the reigning Masters champion. When he got to the par five 15th hole on the first round, he was two over par. When he came off the green, he was 10 years older! After hitting a drive from 320 yards, leaving 200 yards, the Spaniard’s approach went into the water. Just like his fourth. And six. And eighth. And, you guessed it, 10th. In fact, he had to drill a 10-foot putt for a stunning 13. “I don’t know what to tell you,” Garcia said. “It’s one of those things. I feel like – I don’t know, it’s the first time in my career that I’ve done a 13 without missing a shot. Simple as that. I had felt like I hit a lot of good shots and unfortunately the ball just wouldn’t stop. I don’t know, you know, it’s one of those things. So it’s just a shame, but it is like that.”

Be part of the action with a selection of unique golf tournament experiences, from playing in a pro-am with the stars to watching the action at golf’s most illustrious events. Whether it’s the Masters or the Open, the Ryder Cup or the WM Phoenix Open, create your own bespoke package with the experts at Golfbreaks.com.