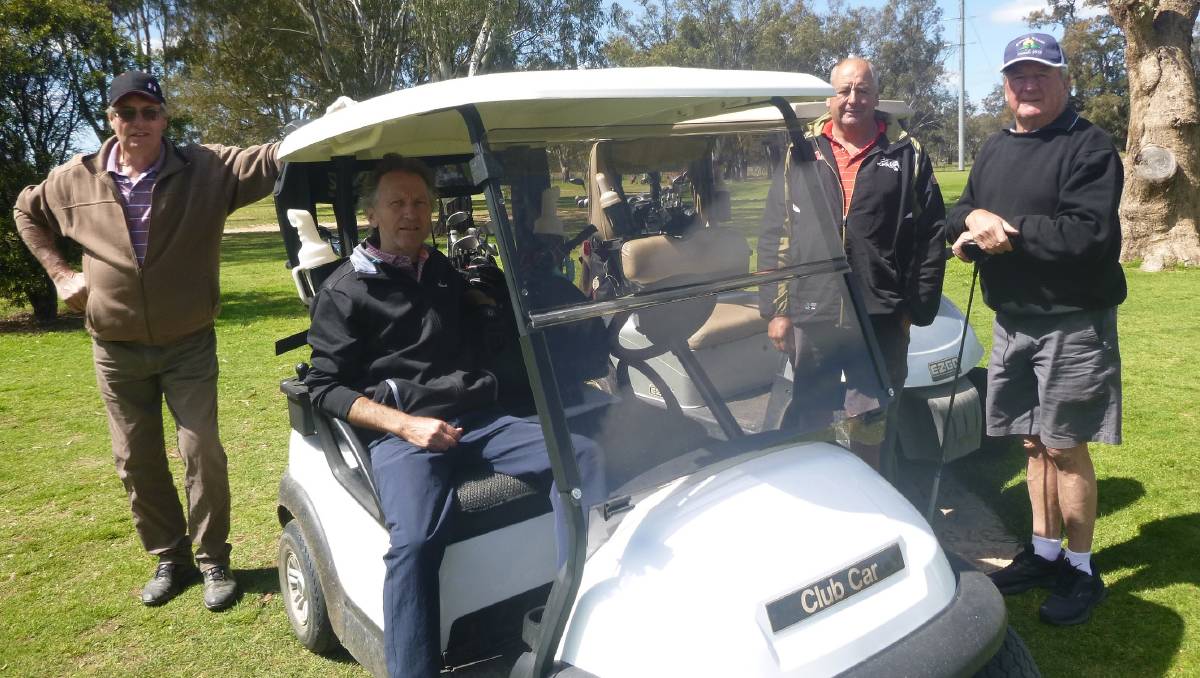 Forbes golfers were eagerly awaiting their game on Saturday with the forecast for sunny conditions. However, the course showed great resistance, with very few players scoring under par.

The â€œbest of the bestâ€ were Phil Wells who had a clear view all day, and Fonz Melisi who easily picked up the pars.

This replaced the planned â€œRoylances Cupâ€. The field of 97 players was eager to score well, anticipating easy shots on fairways and smoothing greens. But the day turned out differently.

The A-Grade score was an indicator of how tough the course was, with just three players below par. Barry Shine was looking for another good day but was knocked down by Peter Cowhan who scored 70 net points.

He started the day with a few bogeys, then ran a series of pars and birdies to score 1 of the 9 forward.

Barry was relegated to second with his 71st goal, but needed a countdown to secure that spot over Glen Hooper. Barry had a roller coaster front-9 but was better on the back-9 with just three bogeys.

The B-grade players recorded the best scores of the day, with 25% of them under par.

Phil Wells could only see the middle of the fairway, clearly see the pine, and easily saw the line of putt to score well under his handicap on both halves and record a clean 65. He beat the “BNC” with a 38 very neat. on the back-9.

The finalist was Fons Melisi with a clean 67. His game was more balanced, but marred by an ‘8’ on the 2nd hole and a few bogeys on the back-9, although his birdie on the 13th was very nice.

The C-grade players did not threaten the peer, but were all reasonably grouped together.

Steve Grallelis enjoyed his day, scoring a clean 73 despite a 4-putt in the 9th for a ‘7’. His four starts, including one in the 17th, helped ease the pain.

The runner-up was Allan Rees with 74 net points, but was knocked out by countdown against Jake Hemming. Allan had an equal split over the two halves, which included a single par in each.

The NTPs went to: 9th – Pete Cowhan; 18th – Jacob Bernardi, both converted to 2. There were eleven 2s scored in total, with the C-Graders missing. Pete Cowhan had two 2s, each on the 9th and 18th.

The Super Pin on the 3rd hole was an early mark on the card for Alec Edwards, reaching 3.4 yards.

The next field all struggled to improve this with no one else on the map. This award helped compensate Alec for his less than expected day.

The greens were certainly easy to put on and should be in A-1 condition by the Champs.

Precautions were still needed because despite the mowing that morning they were still a bit slow and did not take the expected loan resulting in some unexpected results.

What may have affected some players’ play was even more activity in nature. Players around the 2nd green, 17th tee and even the 16th green were harassed by a magpie defending its territory. He doesn’t attack all players, but is quite selective. Black hats with white logos and lettering seemed to be the best candidates for a swoop.

There are always compensations in a game of golf. Jacob Bernardi had a few hiccups but was awarded the NTP on the 18th, and as mentioned, Alec Edwards got his Super Pin before an indifferent day. Niel Duncan easily parried every Par-3 hole, but only stayed in double digits for his raw score.

Another compensation, perhaps, was a group of players made up entirely of left-handed people.

This reduced interference on right-handed play, despite Barry Shine and Alf Davies. In this group, Jeff Haley commented that Brad Ashton “gives a spin to his pictures”. Brad himself has admitted not being in control, this is only his second game in a few months.

Some players have used trees in different ways. Stephen Uphill regularly bounced his ball off the tree to finish in satisfying spots.

Harry Callaghan, Jake Shaw and Tom Toohey deliberately played down the 11th fairway for a challenge while playing on the 12th green. And Andy Grierson used the trees to chart his course throughout the course, with particular issues on the 16th.

One player in particular found the tees difficult to manage. This player was waiting on the 10th fairway for the group in front to advance. When it was time to play, he searched his pockets for a T-shirt, found none and went to get one in his bag. Back off the tee, he found his ball already lying on a tee in the ground, ready for his shot. It is “a memory gap” that Peter Grayson will take a long time to live.

We also welcome Ken Sanderson after his epic journey. He must have had time to train on his trip as his score on Saturday indicated he was in great shape.

The Sunday Stabelford Medley peloton were happy to have a second day in sunny conditions, but with a light crisp breeze.

The victory went to Josh Coulthurst with 37 points on the count. He has improved a lot from his result on Saturday, with a more even distribution of 19-18 points. The finalist was Greg Webb, also with 37 points. Greg was refreshed on the front-9 but the points were less coming on the back-9. He managed to miss the second hole of each half.

The NTPs went to: 9th Andy Dukes; 18th Shane Sallaway. Julie Hurkett got her name on every NTP card, but was “broke” by the field. There was no sweep of the ball.

Saturday, the Grand Final of the NRL will be played. Players are encouraged to show their support for the GF contenders by wearing team clothing. Additionally, as a celebration, players are invited to donate golf coins, with the collection going to a local charity. The debate for the winner rages between the Panthers of Pete Cowhan and the Bunnies of Scott Kirkman.

Players are reminded to adhere to the Covid regulation, requiring QR registration, wearing the mask in the Pro Shop, not congregating and maintaining social distancing.

October 11 is memorable not only for NSW which expects to reach 70% double dose, but also for the start of the “Summer Sixes” competition.

Handicap rounds for non-members can be played before this and offer a good chance to practice. Team registrations must be received as soon as possible and no later than Friday October 8. With a huge prize pool, this could be your year to do really well.

Players are reminded to fill in the points on their scorecard and check the on-screen scan to ensure the score entered is correct.

Saturday October 2 will be a monthly medal event, sponsored by Forbes Concrete.

Sunday at the usual Stableford Medley, just like Monday due to the cancellation of the regional vets tournament.

The club championships start on October 9, there is the NSW National Championships on November 6 and 7 that will affect scheduled games, and the Forbes Nissan Classic moves forward.