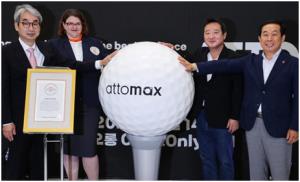 The Attomax golf ball developed by Kolon Industries using an amorphous metal alloy has been officially recognized as the longest distance golf ball in the world.

The company announced on June 14 that the United States World Records Committee (WRC), a world-class records certification body, has certified its Attomax golf ball as the longest golf ball in the world.

In a certification test conducted using a WRC-approved robot swinger, the Attomax golf ball flew 13 to 18 meters (15 to 20 yards) farther than all 13 types of golf balls of 10 other brands.

Attometal is a new material that dramatically increases elasticity, hardness, corrosion resistance and abrasion resistance by irregularizing the atomic structure of the metal.